European stag  beetle, Lucanus cervus cervus is definitely the biggest and one of the most remarkable European beetle. A major male of the stag beetle has impressive mandibules (horns), while females have smaller body and short and strong mandibules. Some exceptionally big males can reach up to 90 mm in size, although normally the size of the males is in the range of 50-70 mm. The females are much smaller, 35-50 mm.  There is a quite strong population of these beetles in the UK; with patchy distribution in Southern part of the country.   Interestingly, if continental Lucanus cervus cervus population is normally associated with woodlands and forests, UK population of the beetle is often associated with  urban gardens, suggesting their importance in preserving populations of this stag beetle species. The development of the larvae of the beetle can take 2-5 years in nature and I understand that the speed of the development similarly to tropical stag beetles often depends on the temperature and nutritional value of the substrate into which eggs were deposited by the stag beetle females.
Although Luncanus cervus cervus species is protected in most of the European countries, which prevents their trade and exploiting of their natural populations, it is my understanding that it is not illegal to handle wild caught specimen or even raise the larvae, if they found not in protected habitat in some European countries. I observed adult beetles flying on a warm spring night in our back garden in south London several times with occasional beetle landing/falling onto ground.
With continuous interest to this big stag beetle, quite recently live specimen of other subspecies or variations of subspecies of Lucanus cervus became available on Asian hobbyist market. These are Lucanus cervus akbesianus, which is considered as variation of Lucanus cervus ssp. turcicus (Sturm, 1843, antennal club of 6 segments) and Lucanus cervus ssp. judaicus (Planet, 1900, antennal club of 4 segments). Since the area of habbitat occasionally overlap for some of these subspecies/variations, there is a possibility of obtaining a wrongly identified specimen. Therefore an easy identification key could be helpful when such specimen are obtained. 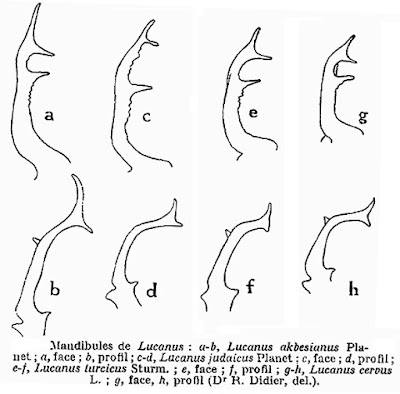 Here I found an interesting  diagram showing the characteristics of the shape of manidbules in different ssp/variations. This one could be very useful when obtaining live specimen to confirm their taxonomic position.
It is my understanding that breeding of protected Lucanus cervus cervus in captivity from generation to generation so far was not extremely successful, so there is still a lot to learn about their breeding specifics. One of the most restricting factors is a limited number of the specimen which can be obtained for such studies. Often, such specimen originate from one heavily inbred population, which would contribute negatively to the survival rate of the captive bred specimen. It is quite possible that using other readily available Lucanus cervus ssp as a model could be very beneficial for learning insights into the raising protected lucanus cervus cervus and restoring their population in nature.

Here are some very interesting reads about  Lucanus cervus.