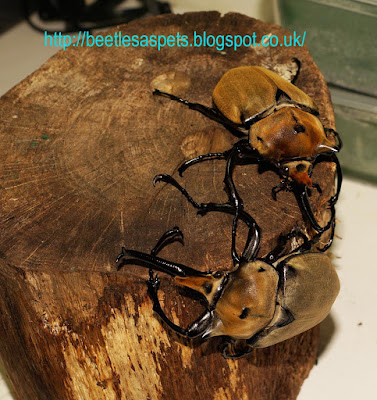 A giant rhino beetle Megasoma elephas elephas is magnificent species from neotropical ecozone which lives in tropical forests from Southern Mexico to Venezuela. The males are one of the largest beetles in the world reaching over 13 cm in size. Considering the fact that the beetle's elytron is also quite wide, the adult beetles look and feel (when handled:) massive. In nature the adult beetles feed on sweet sap from trees and ripe fruits, whereas the larvae are found in decayed organic plant material, such as rotten wood.
Megasoma elephas elephas is one of my favourite species as these beetles are relatively easy to keep and breed. 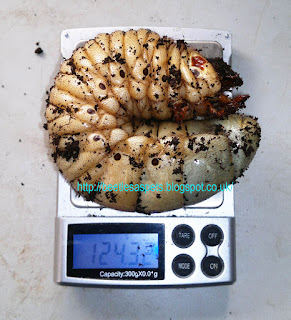 
Once the eggs are hatched, the larvae normally consume the egg's skin and start feeding on substrate right away. The speed of the development of the larvae depends on the temperature and nutritional value of the substrate. The temperature between 18-25C is fine for the larvae. The substrate for the new larvae should be finely mulched, preferable with some forest humus in it, which the larvae will readily consume. I noticed that my M.e.e. larvae developed quicker on the substrate composed mainly of decayed leaf litter with occasional supplement with dog food pellets,  rather than on the rotten wood or fermented rotten wood. The humidity of the substrate can be from quite moist to just moist; the larvae develop normally in both of them. The larvae of a similar size can be kept together in small containers. The only condition is that the area of the bottom of the container should be large enough for all the larvae to stay at the lower level. It is important that the box should have enough holes for a good air circulation, in order to prevent the accumulation of toxic ammonia derived compounds. The substrate can be replaced only after the most of it was consumed by the larvae. On average the L1 stage of the larvae takes from 3 to 5 weeks, the L2 stage of the larvae takes 6-9 weeks, and the L3 stage takes from 8-16 months. The larvae molt to change their head capsule, as this part does not grow, so the larvae of different stages differ by the size of the head capsule.  The good-developed female larva reaches the pupation weight at 60g+, when for the male larvae this weight is 90g+. The male larvae can be as heavy as 140g+. Once the larvae have reached this weight and  became yellowish in colour it is then transferred into the bigger box for the pupation. The larvae creates the pupation chamber which is quite big, so the volume of the substrate needs to be taken into consideration. The lower layer of the subtrate in the pupation box should be replaced with some potting or top forest soil; this will help the larvae to form sturdy pupal cells. For example, for 4 big larvae the pupation box should be at least 25-30L in volume. It takes 2-3 months for the larvae to form the chamber and pupate. During this period the larvae should not be disturbed. The larva often creates the chamber next to the wall of the container so its transformation can be observed through the translucent wall of the box. Normally after 3 months waiting I remove the pupae and transfer them into the artificial pupal chambers.

Left- the pupal chamber constructed near the wall of the container. Middle - opened camber with a female pupa inside. Right - the male pupa.

Adults
When the pupa turns into an adult beetle it requires about several days for its elytra to harden completely. After that the beetle stays inactive for 4-6 weeks. The active adults will eat any sweet ripe fruit such as pear, but overripe banana or beetle jelly will be the best food for them. The temperature should be between 20-25C and the level of humidity in the enclosure should be high, as naturally they live in a humid tropical environment. The beetles have very long legs and are very grabby, so sometimes it takes quite an effort to take it off your hand.
Although many breeders suggest feeding the female of a rhino beetle for about 2 weeks before mating, I did not see any significant difference in number of eggs laid between "pre-fed" and fresh females, especially if you are going to have only one pair of adults in the breeding box. The egg laying setup is similar to any rhino beetle setup; the potting soil is mixed with some mulched decayed leaves and wood and the lower layer is compressed with a hand. A few bigger chunks of wood should be placed at the top of the soil so the beetle could grab if it flips over. The eggs and the fresh larvae can be collected after about 1.5-2 months. The female may lay somewhere between 30 and 60 eggs, but sometimes more.  The most of the eggs will be laid in the compressed bottom layer of the box.