The origin of this stag beetle is jungles of certain islands of Indonesia (Sulawesi, Peleng, Sangir,  Bangkulu, Sula, Bachan, Halmahera and Morotai).  It is even considered that the different population of these islands are of different subspecies.  The males of these beetles can reach 9 centimeters (reported record is of 100 mm) in length, of which more than half are mandibles  equipped with spines which male uses in battles with other males to win female's attention. Females, in turn, are rather small and rarely exceed 3 centimeters in size. The males of these beetles have beautiful metallic-brown colouration which at right light angle appears as a golden-brown one. These beetles are quite popular in beetle breeders as well as with amateur hobbyists because of their attractive looks and by easiness in care.  The development from an egg to imago (adult beetles) can  take 9-11 months, but from my experience this term could be shorter if grubs are kept at higher temperatures. The larvae of these beetles are not cannibalistic so they can be kept together in larger containers under condition that sufficient amount of feeding substrate is provided. It is also reported that fungi based kinshi substrate bottles are not really suitable for rearing larvae of these beetles and fermented wood flake substrate needs to be used. 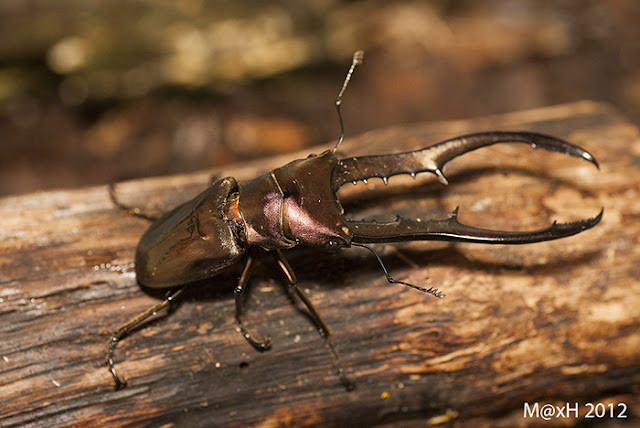 These beetles seem do not like any "harder food" and any liquid food is more acceptable for them. In my experience they prefer liquid food, such as liquid from juicy ripe fruits such as sweet oranges or clementines even to popular beetle jelly, available at various pet shops. A watermelon and a melon, any sweet apple,  half of a grape or a sharon fruit will be also fine.  Just mush top of the fruit slice with a teaspoon to allow juice to come out of flesh of fruits. This seems help beetles to obtain the juice that they needed.  Try use some sort or tray for the fruits, and do not put them directly on a substrate as it will accelerate their moulding. I am using plastic milk caps for this purpose. Lightly moulded fruits are still fine, as they still have some sugars in them and beetles still enjoy them.   To obtain juice from fruits beetles piercing the fruit's flesh with their “feathery mouthpart bits” which are called galeae in the scientific language. I normally also put a few drops of water sweetened with brown sugar or honey. This seems stimulate beetles to start feeding. Sometimes,  initially it  requires to put a beetle on the top of the food encouraging it to feed. Although the discussions between expert breeders whether some imago stags need protein supply in their diet are not conclusive, you may still want to increase the protein content in their diet. I would not recommend adding any "yogurt"; as using plain ripe banana mash will perfectly work for this purpose.  Banana has relatively high protein content (up to 6%) so banana well mashed with some still water sweetened with brown sugar or honey will work just fine.

Mating
After you have obtained a pair of these beetles it is the best if you can visually confirm that the pair has mated.  This can be done by placing male and female into a mating container which is a small clear plastic box with some substrate and a few pieces of wood which would allow beetles to hang on it. This allows to observe the mating easily. Best way is to put a hungry female on top of a fruit slice and while she is feeding on it, gently place a male on top of her. Male needs to be well-fed  beforehand, otherwise meal would be his first and only goal:).  Female will eat and go into a hide and male still will be busy with his meal:) Sometimes female is not interested in mating, if it is not mature enough or possibly because she feels that the mating box is not suitable for her to lay the eggs. If mating does not occur for some time, the female can be placed directly into an egg laying container with 1 or 2 males in it. In my experience the dominant male normally takes place near the provided food, and often the one who lives longest. Males will also often fight for the dominance, which often leads to a premature death of a weaker male.


Egg laying setup.
Female of this beetle will lay eggs into softer parts of the dead wood collected in the forest.  In my experience the female would prefer oak to other kind of trees, but beech and other trees such as ash or poplar could be also fine for egg laying.  It is considered that wood for the majority stag beetle species should not be very hard and should not be very soft too. You should be able to scratch it easily with a nail, but is should not be very hard.  With these beetles I have been finding eggs even in substrate, but not in logs.  female would chew a 1-5 cm hole long hole about 1 cm deep and fill it with chewed pieces of wood until it forms a clump. The ovum normally is in the middle of the clump.  My setup is normally a 25-30L plastic box, filled with garden soil from the bottom (10 cm pressed hard), then 2-3 logs (8-15 cm diameter, 10-30 cm long ) all covered with foul white wood mixed with soil so the substrate just cover logs.  The humidity is high, with a few small holes in the side of the container. Fresh food needs to be placed  regularly to keep female active and make her lay more eggs. Female usually would come out at night, unless she is very hungry.  Optimal temperature is around 22-25 C, however, females will lay eggs even at 16-18 C.


After about 3-4 months logs are carefully removed and inspected.  The female most likely will be dead by this time. Logs are carefully split with hands or using a screwdriver and grubs are removed.  Grubs are placed into containers with fermented wood individually, although they can be kept together and separated when they reach late L3 stage. Larva of this beetle species are not cannibalistic and it was reported of successful raising several larvae until imago in same container. I usually mulch original wood logs where larva initially lived and mix it with fermented wood flakes (30/70%), by this transferring some beneficial bacteria that helps larva to digest cellulose.

L2 Cyclommatus Metallifer larva in split log. Logs needs to be split carefully and larva needs is traced by by following the holes in he wood. Also some larva may leave in the substrate of the breeding container, so the substrate also needs to be checked carefully. Please note shape of the last segment characteristic for various stag beetles (Lucanidae) species

Clear deli cups 0.3-0.6L is convenient for this purpose, as they allow to observe larvae's activity. Grubs tend to eat substrate close to the sides of the containers so it helps in checking on their development and providing food supplements. If you want to obtain bigger adults, some high protein food supplement such as dog food needs to be provided. I use Bakers Meaty Meals chunky pellets,which are relatively dry but soft and 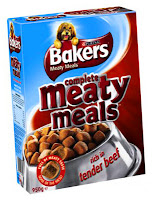 they are not getting mouldy very quickly compared to fish flakes or some other additives. Often larva would not eat a pellet, unless it is placed right in front of it. I make hole in substrate with pencil and place about a quarter of the pellet next to the larva. After about 3 months about 50 percents of the substrate is replaced with fresh fermented wood. Depending on the temperature and conditions it may take as little as 8 months to obtain imago of the beetle. The larvae normally pupate close to the side of the container, so it's activity could be observed. In my experience, I had much higher rate or survival during molting to imago if pupa transferred into the artificial pupa chamber which could be easily made at home (I will illustrate this in a future post). 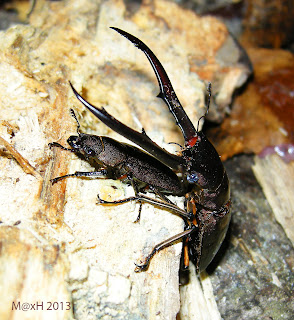 To see more photos of beetles, please visit my flickr page at

You can also contact me via beetlesaspets@gmail.com
regarding availability of these beetles for sale or exchange.