The rose chafer, cetonia aurata in the garden. 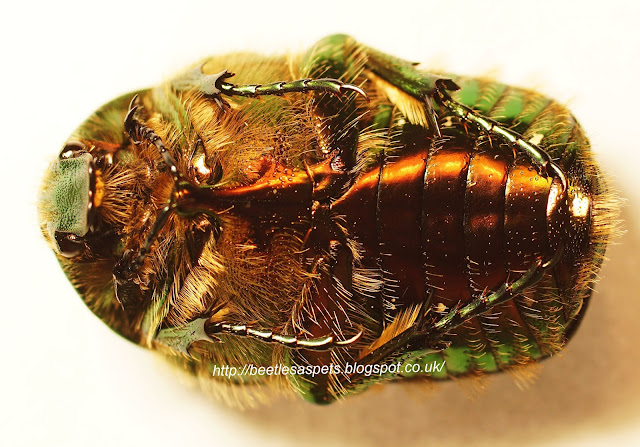 The underneath photo of the rose chafer, cetonia aurata, female

Although it is considered that the rose chafer is widespread in the UK, I have never seen one in nature feeding or flying. Some photos found on internet showed the presence of these beetles in relatively close places, mainly big parks, such as Richmond Park. So I assumed that their habitat in London is mainly associated with woodland and park areas. However, about 3 or 4 years ago I left a big plastic box that I used for breeding of my beetles outside in our back garden; the box was filled with some garden soil mixed with rotten wood and leaves. The box was not covered and stayed outside for about 6 weeks. When I decided to reuse it, to my surprise, I found about 40 small larvae in the soil with a female of the rose chafer on the top the soil. This suggested that this female, which was flying in the area, found the box with substrate rich in decaying wood and leaves and decided that it is acceptable for her offspring. 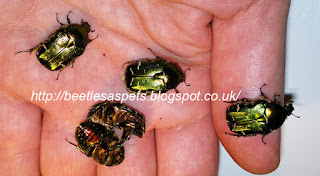 I normally remove quite a lot of the used beetle larvae substrate from my boxes and I usually "discard" it into the vegetable patch in our back garden. This used substrate apart from larvae's frass still contained a significant part of uneaten material such as rotten wood and decayed leaves. This spring I was digging soil for the tomato patch and discovered 5 larvae similar to appearance to rose chafer larvae. We have plenty of summer chafers (amphimallon solstitiale) flying in spring and summer in our garden, so automatically I assumed that these are the larvae of this species. However, I decided to keep these 5 larvae and put them in the box with some decayed leaves. About 2 month ago these larvae pupated all together and later emerged as 5 beautiful rose chafers, 2 females and 3 males, which seems almost a perfect ratio! I made and break with these species about couple years ago but it seems that I will be starting with them again.   The males of the rose chafers, as many other flower beetles, have a distinct "invagination" on their abdomen, which often appears longitudinally divided (please see the photo below) 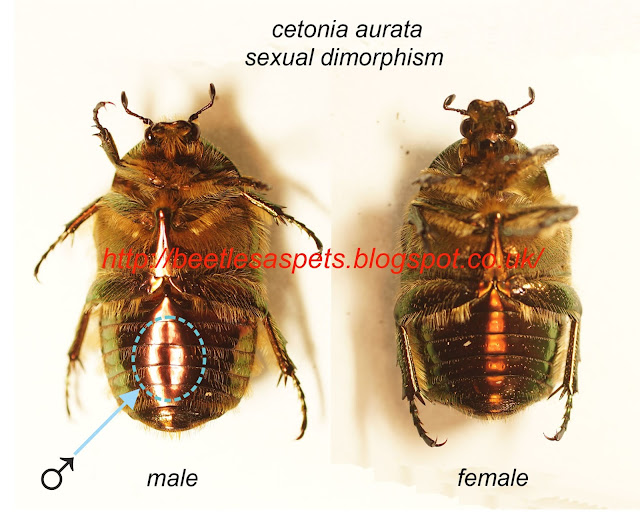