A brief (and hopefully) comprehensive guide to the substrates for rearing larvae of flower, rhino and stag beetles

When I was starting with  beetles, I had trouble with finding info about what kind of substrate is suitable for different sorts of beetles. The things were further complicated by information obtained from various beetle "keepers" enthusiasts which used different substrates to raise same species of beetles.  Since I am often being asked similar questions, I have decided to break down this information in one post. This information is mainly based on my own knowledge/experience and presented in a very shortened generalized form, and thus may not be suitable for some specific beetles. However, most likely it will suit very common groups of beetles and the post could particularly be helpful for beginners.
There are 3 most popular groups of beetles which are kept by breeders.
These are flower beetles (family of scarab beetles, Scarabaeoidea, subfamily Cetoniinae; such as Pachnoda ssp, Dicronorrhina ssp or Mecynorrhina ssp), rhino beetles (family of scarab beetles, Scarabaeoidea, subfamily Cetoniinae, Dynastinae; such as Megasoma ssp or Dynastes ssp), and stag beetles (family Lucanidae, such as Lucanus ssp or Dorcus ssp).
The development of larvae of all these groups in nature is usually attributed with decaying organics, mainly rotting wood.  However, in captivity many breeders often grow major adults using leaf litter or leaf litter mixed with decayed wood as the main substrate. It is also generally accepted that the simplest substrate is the one consisting of decayed leaves and wood of hardwood trees such as oak or beech. Therefore "the basic" substrates are: 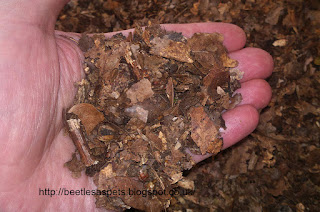 This substrate normally consists of a lower layer of partially disintegrated decayed leaves which could be mixed with some woodland top soil (humus).  The leaves should be well decayed, not freshly fallen, preferably at least 1 year old. In such substrate, hard parts of leaves are pre-digested by microorganisms. The presence of soil in such substrate could help distributing the moisture and developing of the beneficial bacteria, particularly if a container with larvae is not very deep.
This substrate is good for any flower beetle larvae, although some species may require some additional protein supplement during their later stages, e.g. starting from the late L2-early L3. Some beetles such as goliath beetles, starting from L2 stage require mainly high protein food, and almost do not consume any other substrate.
This substrate is also used by many breeders for raising larvae of some rhino beetles, particularly of megasoma ssp.

2) Pure decayed (rotten) wood.
This is normally pure rotten wood from hardwood trees (oak or beech are always preferred), which ranges from soft white to brownish/black in colour and either soft or just soft, but not hard wood. The soft wood is that kind that you can easily brake and crumble it with your hands, the "just soft" wood is that kind that it is difficult to brake it with your bare hands, but it would be very easy to hammer the nail in. This wood is usually the result of part of the tree being damaged by fungi and in such wood the most of the lignin is destroyed either by fungal and/or bacterial activity. The softer wood can be used for rhino beetle substrate and for oviposition of majority stag beetles such as lucanus, although the "just soft" wood could be also good for the some other stag beetles such as dorcus or phalacrognathus. Both types of wood could be mulched and used as food for both stag and rhino beetles right away, although the majority of stag beetles may prefer the harder ("just soft") decayed wood.  Since the nutritional value of freshly decayed wood is not exceptionally high, some additives such as soy protein powder or dog food pellets are often recommended, particularly at later stages of the larvae development. The decayed wood which you can find inside of large dead oak trees and which has pure brown colour and feels like a cork is not suitable, as in such wood all nutrients such as cellulose are already disintegrated.

3) Decayed wood and leaf mixture.
This is normally the mixture of mulched decayed wood and leaf litter mixed together. Stag beetles normally do not grow well in "leafy" substrate and require decayed wood or more advanced substrate for their growth.  This substrate, however, works quite well for many rhino beetles, particularly with some additional protein supplements starting from the early L3 larvae. In my experience the early larvae of many rhino beetles grow better in decayed leaf substrate with only little wood in it; then the bigger the larvae may require more wood as they grow. I normally end up with like 40% of the wood in the substrate for the late L3 larvae. All bigger chunks of decayed wood (ideally a log) need to be placed at the bottom of the container so the larvae could easily access it, if they would require more wood.

1) Fermented wood (flake soil)
In this substrate the harder wood components such as lignin are pre-digested by micro fungi and bacteria. The substrate is normally made using hardwood sawdust/shaving, baking flour/bran, often larvae frass and sometimes yeasts. The yeasts develop "feeding" on carbohydrates of the additives bran/flour and products of the fermentation at the beginning of the process and it is believed they are closely associated with some fungi which digest harder components of the wood. Yeasts are not necessary if larvae's frass is added as an additional source of favourable microorganisms and nitrogen. Ultimately, the process leads to exposing cellulose of the wood and at the same time enriching of the substrate with nitrogen-rich biocompounds/microorganisms which later are assimilated by the larvae. The "indoors" process is most effective at the temperatures above 20C and in bigger volumes and requires often mixing of the substrate. At 25C using air dried oak sawdust it takes about 2 months to obtain a good substrate for stag beetle larvae  or 3-4 months for rhino beetle larvae.  The substrate can be made oudoors in well ventilated capacities, e.g. woven bags, preferably in direct contact with the soil.  It allows a massive influx of bioactive microorganisms from soil which together with efficient oxygenation provides faster wood degradation and does not normally require regular mixing, heat or addition of the yeasts. The ready substrate could be from dark brown to black in colour when moist and should not smell ammonia or alcohol but have rather "earthy" smell. As the composition and degree of wood degradation of fermented substrates obtained from different sources may vary, it is always wise not to replace the existing larvae substrate with a new one right away completely, but to introduce the new substrate gradually especially for slow eating larvae such as hercules beetle.  The advantage of such substrate is a high availability of the remaining cellulose and nitrogen-rich bacteria/components which promote the larval growth. The fermented substrate for rhino beetles can also be used for flower beetles, although I personally did not find much difference in development between flower beetles larvae growing in fermented wood flakes and in the leaf litter substrate. 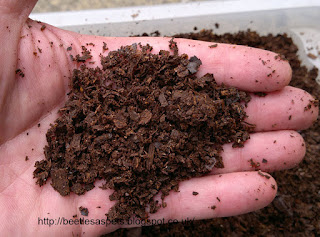 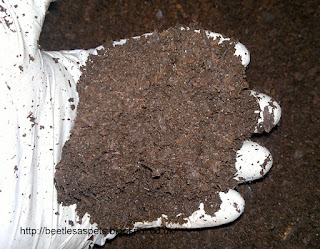 2) Kinshi
Kinshi is the well developed mycelium of fungi, which is normally grown on oak or beech sawdust/woodflakes. Due to the high nutritional value kinshi represents an excellent substrate for various beetle larvae, particularly some stag beetle larvae such as dorcus or phalacrognathus. Kinshi  can also be given to rhino beetle larvae but only as a part of the substrate. The woodflakes, mixed with some additives such as baking flour, are sterilized, and the mushroom spawn is introduced. It normally takes at least 2-3 months for spawn to completely colonize the substrate. In ready to use kinshi the fungus colonizes almost all free space of the container and the substrate should have a  bright white colour. The most common fungus used for this purpose is king oyster mushroom, pleurotus eryngii,   perhaps because its mycelium develops much quicker than other similar mushrooms. This allows fast colonizing of the substrate, thus decreasing the chance of the  contamination with mold. Another fungus, which is important for the development of some stag beetles such a Allotopus ssp, is turkey tail fungus, trametes versicolor, is often used for making kinshi. The biggest challenge of the kinshi production, particularly the one at home, is a contamination of the substrate by mold which can easily put off  any breeder from making it:( 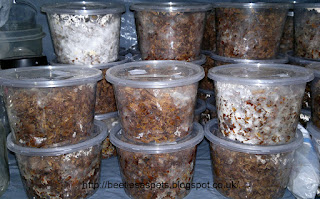 kinshi at early stage;  various degrees of colonisation of the substrate can be seen 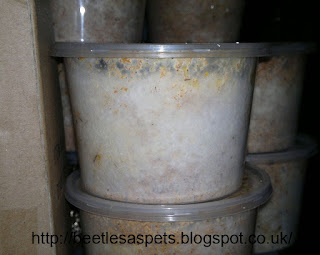 ready to use kinshi

You can contact me via beetlesaspets@gmail.com regarding any related issue
Posted by PetBeetle at 05:26