Last spring I obtained some L3 larvae of the European rhinoceros beetle, oryctes nasicornis.  These beetles are fairly large and can grow up to 4 cm or even bigger for some subspecies such as oryctes nasicornis grypus.  In nature their larvae live in rotten wood and their distribution is often associated with compost heaps and sawdust mills.  Moreover, the relatively higher temperature during winter in compost and sawdust heaps allowed these beetles to spread far north in Europe and Asia.  Remarkably, the oryctes nasicornis is absent in the United Kingdom and has not been reported breeding in the wild in this country.  The larvae feed mainly on decayed wood, but any decayed vegetation, like the one that can be found in compost heaps, can serve as a food source. The adult beetles do not feed, however, can live several month using reserves accumulated during the larval part of the life cycle of the  beetle. 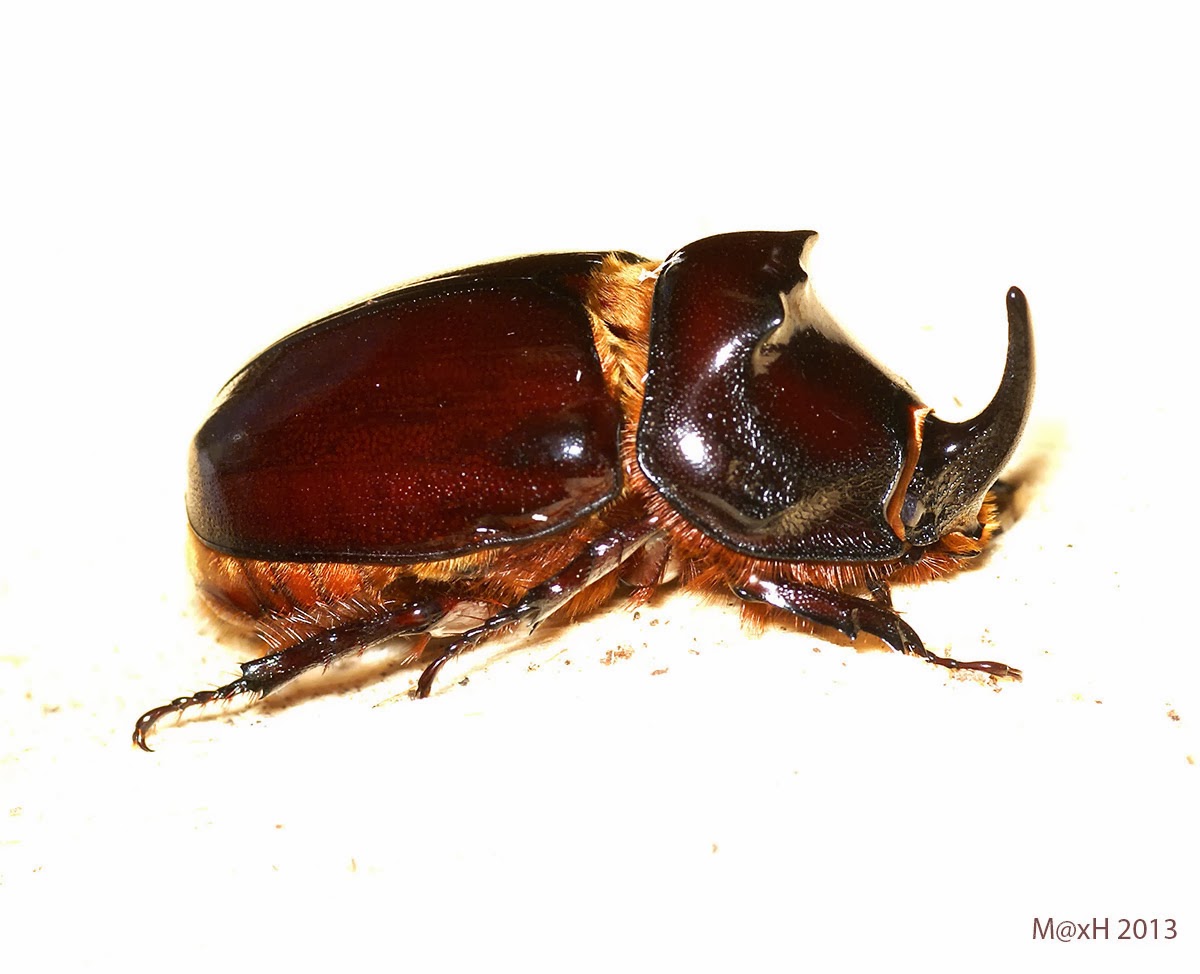 My larvae were in late L3 when I obtained them, so they turned into the pupa pretty soon. Interestingly, the pupal stage lasted only 2-3 weeks, perhaps because the containers were kept with my tropical beetles, and the temperature there was around 22-25C.  Adults (2 males+2 females) were transferred into an egg laying container (40l plastic box) where they stayed inactive for about 5-7 weeks. The egg laying container was set up as follows. Bottom layer- 15-20 cm of the garden soil mixed with mulched oak leaves and rotten wood (oak, poplar, willow). The proportion of wood:leaves:soil=80%:10%:10%. This layer was pressed hard. On the top of this layer, I placed another layer (about 15 cm) of the soil with the higher contents of mulched wood and leaves. All was finished up with individual chunks of well-decayed wood, bark and oak leaves on the top.

The adults spent about 3-4 months inactive in the garden shed. After that I transferred them into my beetle breeding cupboard where they stayed inactive for another couple weeks.   After one night I discovered that big chunk of softwood was split into a few pieces, which suggested that something is going on there:)  I waited patiently for about two months and then checked the content of the box.  Firstly I found one female dead :( and then a reasonably big L1 larvae in a top layer. When I started digging further I found quite a few (40+:) L1s and eggs.  Eggs and smallish L1 larvae were in clumps of substrate about the size of a large cherry that was tightly packed by the female during oviposition, so it was not very difficult finding them :)  Some clumps had not just one larvae/eggs inside (please see photos below). I was surprised how big the egg of this rhinoceros beetle is; the fresh laid egg was about 3-4 mm long which then expand to about 5 mm ball. The remaining female was placed into another smallish container, hopefully she will lay a few more eggs.

From left to right: freshly laid egg, egg that about to hatch, newly hatched L1, and older L1. Same head size confirms that bigger larva is still in L1 stage.

You can also contact me via beetlesaspets@gmail.com regarding any related issue and availability of beetles.